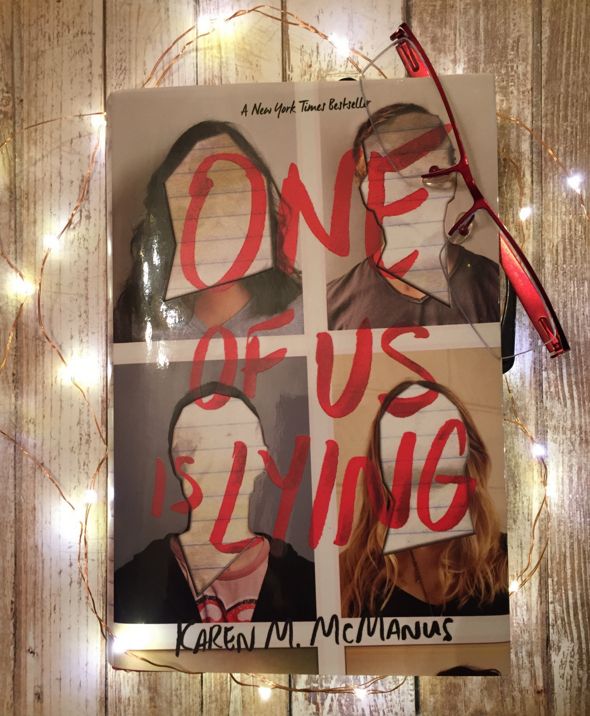 I happened to see this book at the local bookstore. It was on a YA hardcover display, but it was one I had never heard of. When I read the cover and saw that it was billed as The Breakfast Club meets Pretty Little Liars, I knew I had to read this book!!

Five teens find themselves in detention: Abby the princess, Bronwyn the brain, Cooper the athlete, Nate the criminal, and Simon, the outcast who posts his fellow classmates secrets and lies on his social media app. But Simon doesn’t come out of detention alive. Simon was going to post secrets of each of the teens he found himself in detention with the very next day, and each of them has a motive in his death. His death becomes a news sensation, and each of them has to face their secrets and their fears. During it all, someone is posting comments on Tumblr taunting them. The comments suggest one of them was Simon’s killer, casting doubt among their classmates and each other.

I loved this book!! I loved the characters and the different realities each one had to face. I loved that they formed an unlikely friendship. Teens today face such different adversities than they did in my time, or at least much more publicly. I am very thankful that I did all of my stupid antics before social media existed!

Each of the kids publicly meet their stereotypes. I am not a fan of stereotypes, but I did like that the author illustrated that their lives had challenges unseen publicly. Abby, the princess, was the prom queen, was the envy of her classmates, even dating the football star, but at home her mom is a hot mess. Cooper, the athlete, is a very good looking and talented baseball player, a guy who could do no wrong in the eyes of his friends and even teachers, but at home he gets tremendous pressure from his father.

I was able to guess half of the ending, which was kind of frustrating. Some of the clues were very obvious, and anyone who was paying attention could figure it out. The other half was completely a blind side!

Overall, I really enjoyed the book. It was a fast, easy read, one that was perfectly paced. I do believe this is supposed to go into a movie this year, and I am excited to watch it and see how it transfers to the big screen. How could you not want to read or watch a modern Breakfast Club with a murder twist!?