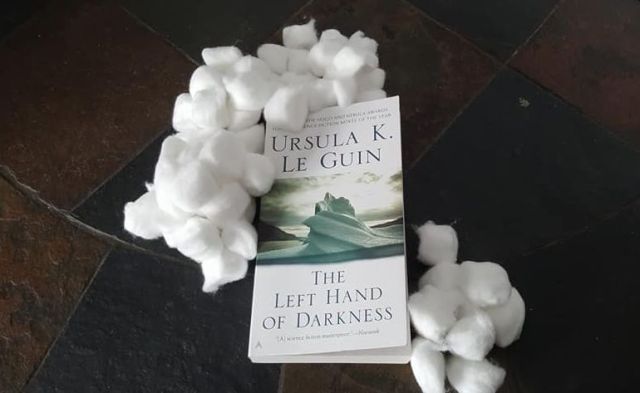 This was the other book I picked up for my birthday. I’ve never ready anything by Le Guin, but I’ve heard a fair bit about her. I wanted something completely new; new style, new author, new experience. So this book jumped out at me as something I don’t usually buy, even though I love reading sci-fi. I read the back of the book and it sounded like a stand-alone, perfect! Even when I started reading, there wasn’t a moment where I felt confused, or like I was missing something, so I was kind of confused when I found out this is actually book 6 in the Hainish Cycle. Through a little research, it sounds like the Hainish Cycle is about a different planet each book. Which personally, I think is really interesting!

The book is written as if the main character, Genly “Genry” Ai, is dictating a story, with odd chapters of planetary mythology, and journal entries from a traveling partner. Genly is a human, from Earth (I have to make this comment because there are Humanoid creatures on other planets, and I guess Human colonies on other planets), who has traveled to a planet called “Winter” to study its people and their strange physiology, and to get them to join a sort of Universal order, so his journal entries are mostly his thoughts on his situation and the civilization he was sent to study.

As interesting as this story was, I knew right away it wasn’t for everyone. This story is very political, not only with the Gethenians (people on Winter), but in Genly’s constant comparison between his world and theirs. The story isn’t very “story” heavy, it’s more like a science and social journal. And Le Guin knows her science. It’s written in such a way that even though they’re on a different planet, it makes sense.

The main reason the planet was of interest to Earth was because it’s people actually have no sex – the majority of their lives are spent without being “male” or “female”. Then once a month they enter a phase called “Kemmer” where their body develops a sexual organ. But, each Kemmer might be a different sex. Because of this strange physical trait, their perception of “family” and “romance” are very different. As well as their look at Gender. Having sex isn’t a taboo like it is here, the point of Kemmer is to procreate, and there are entire “dens” for people to go when they are in Kemmer. There is no Marriage, and relationships are rare but do sometimes happen (partners are referred to as Kemmerings). Another thing I found interesting was if someone went into Kemmer and their body chose a sex, they could entice another person into Kemmer (which I’m kind of starting to think of as menstruation) and they would automatically be the opposite sex. Someone developing the same sexual organs was so rare it was rarely spoken of, and there was no word for it. The non-gendered aspect of society helped it to develop but also didn’t curb the way it developed. There was no gendered jobs, clothing, societal expectations, nothing like on our planet. This is where Genly, being from earth, made the story interesting. He perceived everyone as a “he” because that is what we do, but Gethenians don’t have words for “he” and “she” outside of animals (language barrier when Genly was trying to explain his society). And Gethenians refer to people of their species who only develop one sex as “perverts”, so Genly was thought of amongst the people as a Pervert. Another thing I found interesting is Genly was so rooted in Earth Misogyny that he became disgusted if one of the people he perceived as a “he” was showing feminine traits outside of Kemmer. Even when he was asked to explain a human woman the traits he remembered were as being lesser then men. Not as smart, not as strong, etc. It was interesting to see Earth’s ideas of gender, combating with a society without.

Outside of the odd condition of sex, Winter is a planet covered in snow and ice (Karhide have 60-some-odd words for snow) so the people have developed, not only physical traits (thinner noses), but have learned now to develop in a land where nothing grows and there are no large predators.

Scientific article aside, Genly was able to hide amongst the people of Karhide, because they look humanoid, up until he revealed himself as an “alien”. He has much darker skin than the people of Karhide, and his nose is much wider. He was sent down to the planet alone (one is a curiosity, two is an invasion) with really nothing to prove his story but his own body, his ship, and a radio he is only allowed to use if the country agrees to his terms. Most of the beginning of the story is Genly trying to navigate Karhide culture to get a meeting with their Leader. Who is certifiably insane and could potentially see a traveler from space as a threat to his God-like rule.

The story is basically Genly Ai navigating different cities/countries on Winter and trying to figure out how to get their governing bodies to believe him and agree to join their order so he could radio down his ship. When I stopped to think about the actual story, there isn’t much of one. There is no action, no edge of your seat moments, and it is absolutely not a fast read. The story is incredibly interesting, but it’s the science and political aspect of it that is interesting. Genly learning about their society and comparing it to what he knows to find a common ground to help his understanding.

Like I said earlier, this is not a story for everyone. If you go into it expecting star trek, you will be sadly underwhelmed. That being said, I want to read the rest of the Hainish Cycle series! I think there are around 10 in the series, and I would love to read all of them!