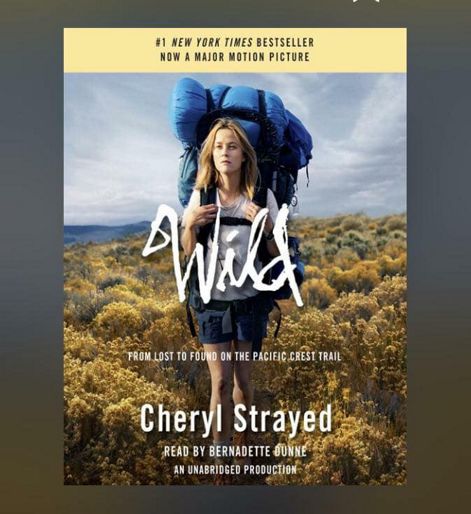 This is another book that I sold a ton of while working at the book store. However, it really didn’t capture my interest. I remember the author being interviewed by Oprah, which made me lose interest even more. Then Reese Witherspoon picked it up, and decided to make it into a movie, where it became a pop culture reference on the Gilmore Girls revival, and I started to question if I was missing something. I found the audiobook online available through the library, so I finally caved and downloaded it.

The book is the story, as the subtitle suggests, of how Cheryl Strayed hiked the Pacific Crest Trail at age 22. Strayed had decided to hike the trail to help find herself after her mother died and her marriage fell apart. I am so mixed about this book. The parts of the book where she discusses the actual hike were fascinating. The parts about her sexual conquests and how every man she met on the trail wanted to screw her, were not! I mean seriously, she is unbathed, her clothes all sweaty and dirty and smelly…who would want to even think about sex…yuck!

I found the recanting of her mother’s death heartbreaking, and I had to skip parts so I wouldn’t cry while listening to the book at work. I cannot think of life without my mother, she is my best friend, my rock, my anchor. I would be lost without her. I also skipped the part about a dying horse, I found it rather irrelevant, and didn’t enhance the story at all.

I didn’t really like Cheryl. She simply wasn’t an overly likeable person and I couldn’t relate to her. I could understand her making the rash decision to hike the trail after her mother’s death…I am quite sure I will do some crazy things too. But after that, nothing she did came close to something I could wrap my head around. Cheat on and eventually leave her husband? Nope. Date a drug addict and get addicted to heroin as well? Nope! Sleep with any man she encountered? Nope!

At least if you are going to choose to hike such a large and difficult trail, particularly as an inexperienced hiker, perhaps you should do some research? Maybe read a guide book? You have to actually read it though; you can’t just buy it and hope to learn by osmosis. And you should probably read it before you actually hit the trail…just a thought. Maybe put more time into carefully planning the whole thing, make sure enough money is in each supply box, maybe pack more clothing in the boxes, try to bring only necessities, plan a little more for safety. She was lucky to survive after some dangerous mistakes and miscalculations!

I have respect for her for taking on the journey and all that it entailed. It certainly is not something I have any desire to do! I just wish it could have been more of her finding herself and less of her sleeping with the various guys. I wish she could have learned from her mistakes along the way and came out a better person, a more mature person ready to take on the world after doing a badass hike! I know she mentioned at the end in the briefest of sentences how her life has evolved post PCT, but it was rather unmemorable after all that she had been through. I hope she has found happiness and peace after everything, and is a very strong, independent woman who appreciates all that she endured!