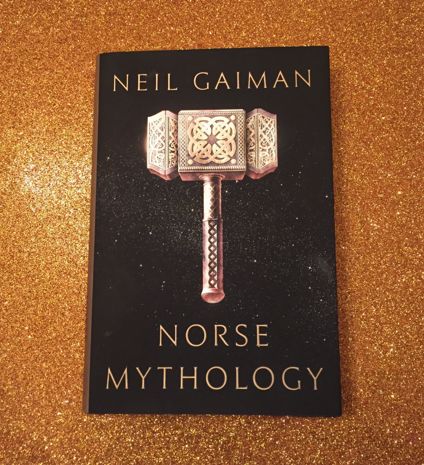 I have read some Greek mythology, Roman mythology, and Egyptian mythology, mainly due to reading Rick Riordan books. The most I have learned about Norse mythology is from watching Thor with my fiancé, which is to say I really do not know much.

I picked up this book for 2 reasons. 1) I wanted to learn more about Norse mythology, and 2) I wanted to read Neil Gaiman. For some reason, I had never tried his books, though I have always meant to, and he comes so highly recommended. This book allowed me to kill 2 birds with one stone.

The book was beautifully written, with short, easy chapters, and I kept the book in my car for quick bursts of reading time precisely because of those short chapters, making it easy to put down when needed. Each character is beautifully flawed, and each story had a meaning and a lesson. Gaiman found a way to bring the rich world of dwarves, giants and gods to life.

The book was written in chronological fashion, from the birth of the world, to the end of all things, which obviously made each chapter flow nicely into one another. My only complaint, and this isn’t against Gaiman or the writing whatsoever, was that the names of the characters were so similar, and I often found myself getting confused and struggling to keep it all straight (this could also have been because as a car read, it took quite some time to make it through the book). To Gaiman’s credit, there was a handy glossary in the book that I frequently used to help me keep track of who was who.

At the end of the day, I really enjoyed this book. I don’t want to say too much about the stories, preferring to leave that magic and wonder to Gaiman. I am excited to watch the new Thor movie now that I know what Ragnarok means. I also fell in love with Gaiman’s writing, and am looking forward to reading some of his other works in the future.