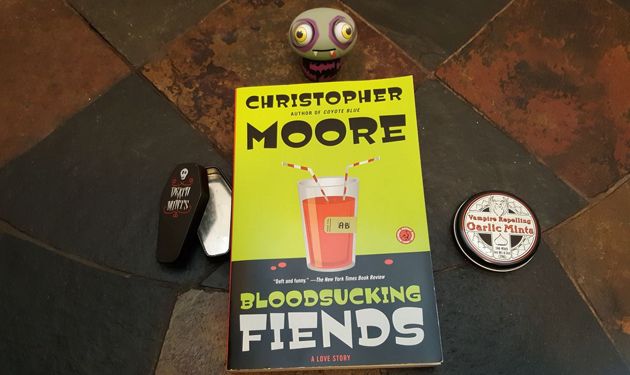 I have a very odd sense of humor. Which basically means I avoid comedy and anything remotely “funny”. What most people find funny I find irritating. My sense of humor is very dark and dry; borderlining ‘British’. Working in a bookstore I came across a lot of stuff people label as “hilarious”, and naturally avoided it. Until I couldn’t. Christopher Moore had almost an entire shelf to himself in our store, he had so many books. And the titles, how could you not be curious? You Suck, Practical Demon Keeping, Dirty Job, the stupidest Angel. the titles alone draw attention! And the covers are all in garishly bright colours (my copy of Bloodsucking fiends is in lime green). I was wary though because I don’t like humor.

But, being the vampire enthusiast that I am, I couldn’t turn down a comedic vampire story.

Bloodsucking Fiends, the first in the trilogy. And underneath the bold title, in tiny red print, is “a love story”.

The story is about a cute (but not beautiful) woman named Jody, a standard Irish descendant with green eyes, red hair, and can’t tan to save her life. While walking home from work she is jumped, dragged into an alleyway, and bitten. When she wakes up she’s under a dumpster and her hand is burning in the sun. Senses heightened, groggy, and confused, she finds a stack of money stuffed into her bra. Hell of a way to start your new life!

The thing I found the most interesting about the book is the reality. Most vampire stories start back in either romanticized Paris, or colonial America. This one starts middle of the 21st century. So Jody has to deal with her boyfriend, money, work, and avoiding the sun. What would normally be a pretty boring story is made actually pretty damn funny with Christopher Moore’s style. Every word and sentence is dripping with sarcasm and his own brand of humor, which I actually found funny!

Jody meets a night shift worker named Tommy (who frozen turkey bowls with the other guys on his shift) and creates a kind of tense partnership of protection and food.

I blew through the entire series because so much happens and the characters are so hysterical and endearing. I read the series years ago and I still quote it in casual conversations.

It is a very adult series, with a fair bit of cursing, but if you can look past that, it is a hilarious series and I highly recommend it to anyone that wants something truly funny! His writing reminds me a lot of David Wong and Douglas Coupland, similar writing styles and sense of humor. But entirely his own thing.